Blue can be a difficult colour to find naturally to dye with so how do natural dyers create blue colours? Let me tell you more….

There are two main sources of blue for natural dyers; Indigo and Woad. Both contain the blue coloured chemical, Indigotin, though Woad also contains very small amounts of other colour chemicals too. Indigo plants are of the species Indigofera with Indigofera Tinctoria being the most used.

Indigo is a subtropical or tropical plant and has been used for thousands of years. The oldest recorded fabric dyed with indigo was from Peru, dated to 6,000 years ago. It was mainly grown in India and it’s use as a dye, and for medicinal and cosmetic purposes has been recorded in Mesopotamia and the Greek and Roman empires. In traditional Chinese medicine it was used to reduce heat, toxicity and cool the blood. (Interestingly, some plants in the Indigofera species are toxic and can kill animals that graze on them.)

Historically, indigo has had immense value as a trading commodity all over the sub-tropical and tropical zones of the world. For example, in South Carolina, by 1775, well over 1 million pounds of indigo was produced and the sale of barrels of it helped fund the American revolutionary war.

Indigo as a dye

Indigo is a challenging dye colour to create. It is created in several ways, all involving a chemical reduction which changes the molecules from insoluble in water to soluble ones by reducing oxygen levels. This is can be done by making the vat alkaline, this is the ‘reducing agent’. These alkalis would have traditionally been urine or ferrous sulphate and lime by a fermentation process. The reduced solution is called ‘white indigo’. When fabric is submerged into the white indigo dye vat and then removed, the soluble white indigo reacts with oxygen, becoming insoluble blue indigo again. Most fabrics are dipped in the vat several times for a deep blue colour, but not left in too long because of the alkalinity which can ‘rot’ the fabric. By the 1860’s, chemicals such as thioruea dioxide and zinc lime (from lime white wash) were used as reduction agents.

Most people have a pair of denim jeans, these are dyed with indigo. You may have seen Japanese Shibori dyeing; complex designs of pleats, folds and sewn tucks are made in (usually) silk fabric which is then dyed in indigo vats. It takes 7 years to become a Shibori master.

Indigo vats need to be maintained and their pH checked regularly to ensure good dye colour and saturation. For this reason, many natural dyers choose to use Saxon Blue which is a tincture of Indigo. Personally I have never had my own indigo vat though I have used them on several indigo courses I have been on. I prefer to use Saxon blue.

The tincture of Indigo known as Saxon Blue was invented by Johann Barth in around 1743. It is a solution of indigo in sulphuric acid which took years to develop to enable wool (cloth) to be dyed blue because indigo is not water soluble. For this reason indigo does not easily or willing dye wool in vats or dye baths.

Its not surprising that when the recipe was sold at the Easter Trade fair in Leipzig in 1748 it was an instant success. Many chemists and dyers developed and improved the recipe. As it was soluble, it was easy to use like other mordant dyes, rather than indigo dye vats which need to reduction process. That is still true today and Saxon Blue is an easy and reliable way to get a range of blue colours. Saxon Blue exhausts well onto yarns. This means there is little colour left in the dye bath after dyeing. It also means that shaded blue colours are easy to create, using more or less if it. I buy larger quantities from Helen Melvin of Fiery Felts who makes up this solution. Not something I would be able to do as it involves the careful use of sulphuric acid to dissolve the indigo.

Woad is a biennial plant which grows easily from seed. The leaves are used to create the blue natural dye in a similar process to Indigo reduction vats. Woad balls were traded until the 1500’s when growing Woad was restricted because it depletes nutrients in the soil so much.

Woad has been used since the stone age and was used as body paint by the Picts and may have been the body paint used by Robert the Bruce. (Think Mel Gibson in Braveheart) This is disputed though!

Creating the blue natural dye from Woad takes a lot of leaves, and a lot of patience. A blue paste is created by adding alkali to the leaf juice solution, which is then left to settle. The sediment which falls to the bottom is the blue natural dye pigment, indigofera, from the leaves. There are other, simpler ways of using Woad, without complicated reduction and filtration. Rebecca Desnos describes a method in her blog post which she calls a salt rub. I have used this technique quite successfully and got a minty blue green skein of yarn.

Fancy having a go?

If you want to have a go at natural dyeing, and want a blue colour, using Saxon Blue couldn’t be easier. Soak your yarn in a bucket of water for several hours at least. Mix the required amount of Saxon Blue with warm water, and pour into your dye bath of water. Add your yarn and stir gently. Heat at 60° for about 45 minutes and leave to cool before rinsing in tepid water.

Saxon blue works well in solar jars too. Just remember to dilute it with plenty of water before pouring in to the jar or else you will get a big blue splodge on your yarn and not much else.

I have Saxon Blue in stock ready for you.

Which ever you choose to do, have fun and let me know how you get on! 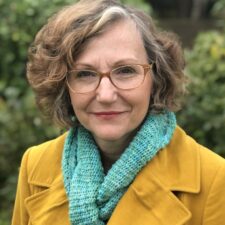 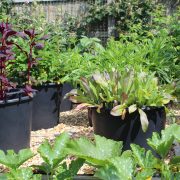 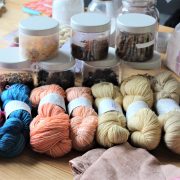 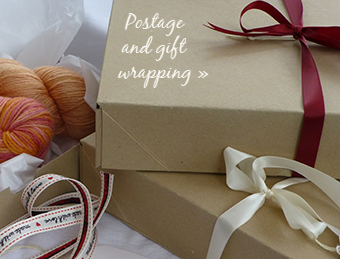